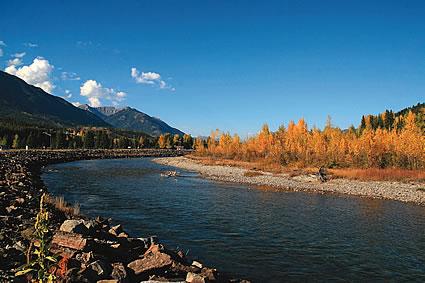 The community of Elkford is diligently working to attract light industry and tourism. — Photo courtesy District of Elkford

Dean McKerracher, the mayor of Elkford, has a deep-seated pride in his community. He has watched Elkford grow and prosper over his 38 years of working for what is now Teck, and afterwards as mayor.

“I helped build the community,” said McKerracher. “I actually ran a grader and levelled the ground where the arena sits today. I ran a grader on the ball diamonds and ran loaders and equipment on the golf course to form the greens. It wasn’t just me personally—lots of people did it.”

McKerracher said that the municipality of Elkford receives 78 per cent of its tax dollars from Teck employees, which is roughly $3 million. McKerracher said that this figure is huge and without it, the community would not have the amenities that it enjoys, including its recreation. However, the community is actively trying to move away from its reliance on this tax money.

“We have been trying to diversify and rebrand with the Wild at Heart campaign,” said McKerracher. “We are trying to attract other light industries. We have the land, the water, the air, we have the communications now and are soon to have broadband I am sure.”

Elkford has also switched to geothermal and solar energies, invested in an automated garbage truck that saves money and has amalgamated the community’s two fire halls into one while adding an ambulance bay.

“We were stuck in a hole, working day by day, just operating to operate,” said McKerracher. “We are tying to become more reliant on our own systems and trying to wean ourselves off of needing the taxes from the mine—we are not going to turn them away, but we need to wean off the necessity of (those tax dollars).”