The community’s new facility is innovative and environmentally friendly 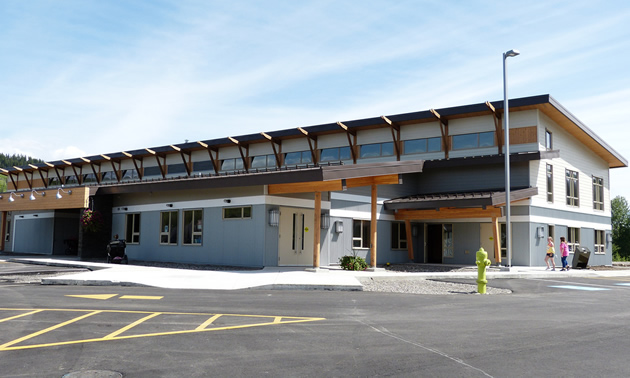 1 of 9The Elkford Community Conference Centre was designed by Douglas Sollows Architect Inc. from Edmonton, Alberta, and it was constructed by Structurlam Products Ltd. based in Penticton, B.C. — Kirsten Armleder photo 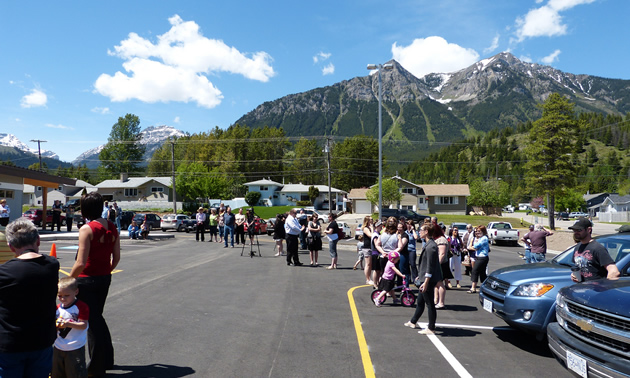 2 of 9Attendees of the centre’s grand opening enjoyed the sunny weather and beautiful setting while they waited for the official ribbon-cutting ceremony to begin. — Kirsten Armleder photo 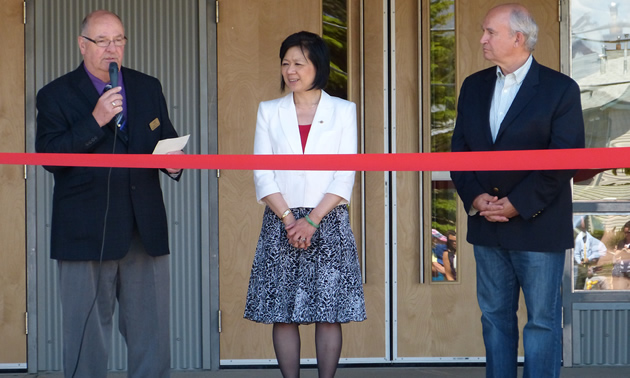 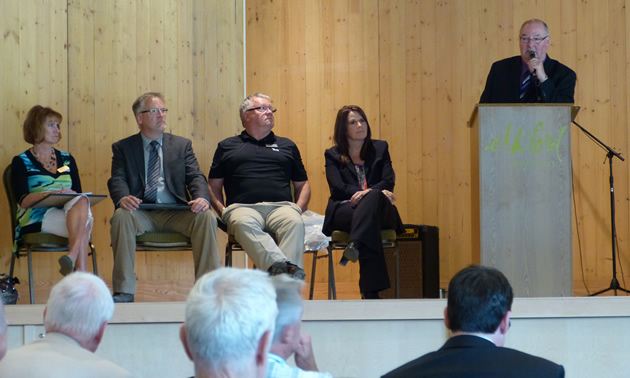 4 of 9During the grand opening ceremony, (L to R) Cindy Gallinger, a director for the Columbia Basin Trust; Bill Downing, president of Structurlam Products Ltd.; Cal McDougall, the land and housing administrator for Teck; Garity Stanley, the director of leisure services for the District of Elkford; and Dean McKerracher, the Mayor of the District of Elkford gave speeches at the centre’s new banquet hall. — Kirsten Armleder photo 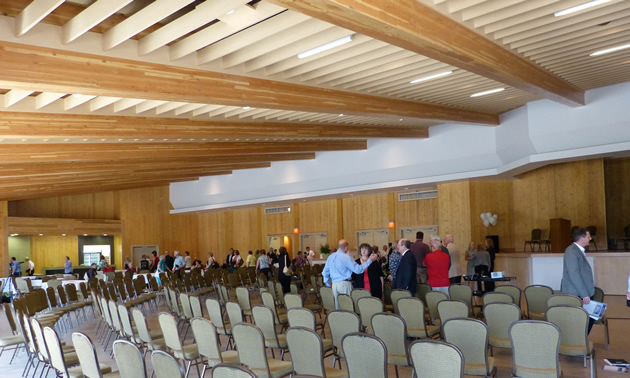 5 of 9The Teck Hall at the new community centre offers space for special events, such as trade shows, corporate christmas parties and wedding receptions; it also has a stage for the performing arts. — Kirsten Armleder photo 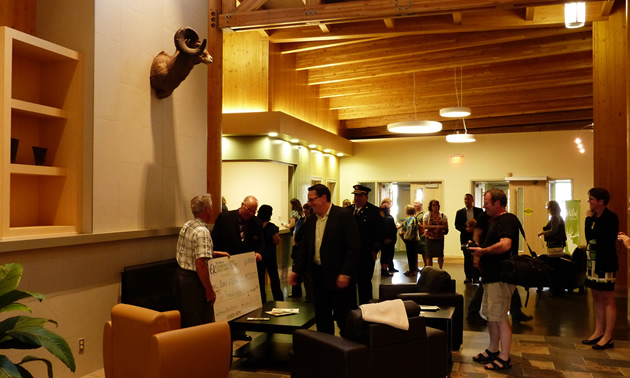 6 of 9The main entrance of the facility provides a welcoming atmosphere. — Kirsten Armleder photo 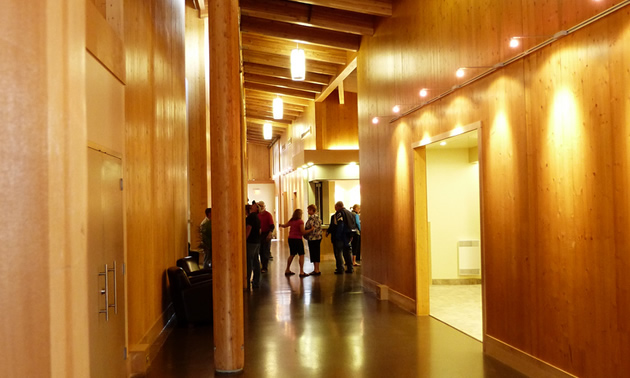 7 of 9The facility is constructed of cross-laminated timber (CLT) wall panels and floors—making it the first commercial application of CLT panels in North America. — Kirsten Armleder photo 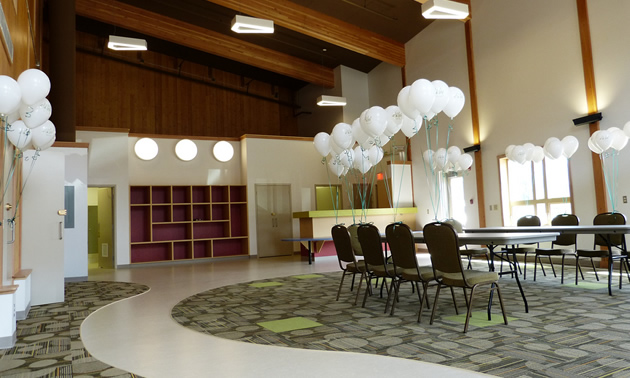 8 of 9The centre houses a playschool. — Kirsten Armleder photo 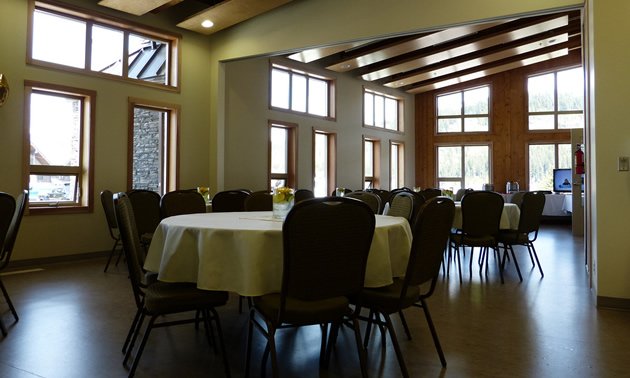 9 of 9The centre has multi-purpose meeting rooms. — Kirsten Armleder photo

A ceremony was held in the centre’s new Teck Hall after the official ribbon-cutting, which was performed by Dean McKerracher, mayor of the District of Elkford; Ida Chong, B.C.’s minister of community, sport and cultural development; and Bill Bennett, B.C. Liberal MLA for Kootenay East.

In his speech, Mayor McKerracher said the new Elkford Community Conference Centre is the first of its kind in North America. Constructed of 95 per cent wood, the building utilizes cross-laminated timber walls and floors, glulam beams and structural insulated panels on the roof, and external wall cladding. It was noted that these pre-fabricated components provide the building with acoustic and structural performance benefits while reducing the structure's impact on the environment.

“The wood use in our new centre provides beautiful esthetics while supporting the wood industry and wood innovation in our province,” said McKerracher. “This building will play a key role in helping our community grow and prosper, benefiting current and future generations.”

Several organizations provided financial aid for this project and they were recognized during the ceremony. Bennett spoke about Teck’s donation of $1 million to the centre as well as Teck’s presence within the community.

“Elkford probably wouldn’t exist without Teck’s support,” Bennett said, later adding, “We celebrate the opportunity to have a corporate citizen among us.”

Cal McDougall, land and housing administrator for Teck Coal Limited; Cindy Gallinger, a director for Columbia Basin Trust; and Bill Downing, president of Structurlam Products Ltd., the company that supplied the glulam beams and cross-laminated timbers, also gave speeches and congratulated the District of Elkford on its new facility.

Tours of the centre and a barbecue took place after the ceremony.

According to Dean McKerracher, who is the Mayor of the District of Elkford, the Elkford Community Conference Centre has been a vision of city council since 2003. In his speech at the grand opening ceremony on June 21, 2012, McKerracher outlined the centre’s history. Here are some historical facts on the centre from McKerracher as well as points on the centre’s innovative design from Wood Works! BC.

- Negotiations to purchase the land on which the centre now sits began in 2004.
- The property was purchased in 2006 for $175,000.
- On August 11, 2007, a fire destroyed the original building and property.
- In 2009, the advisory committee came up with a new rendition for the property.
- Construction of the new facility was complete by spring 2013.
- The facility is located on the traditional land of the Ktunaxa.