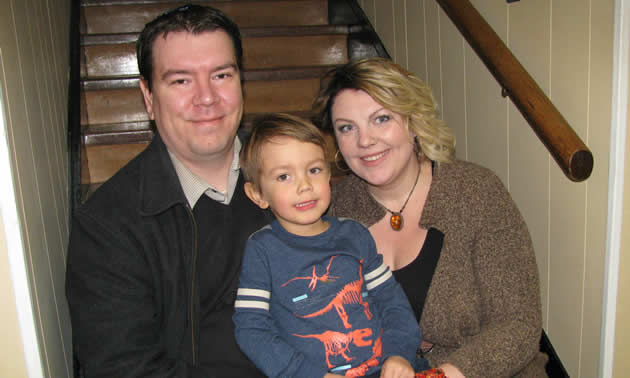 Jesse Nicholas, shown here with his wife, Rachael, and their son, Jacob, is the communications manager for the Ktunaxa Nation Council and chair of the board of governors at College of the Rockies. — Marie Milner photo

As communications manager for the Ktunaxa Nation Council (KNC) since November 2013, Jesse Nicholas makes good use of a skill that he learned early in life—he’s a good listener.

“My father and my grandmother were both leaders in the community,” he said, “and I was instilled early with the wisdom of listening. When you listen, you gain understanding of where a person is coming from, why they are here and what their perspective is.”

“Being able to serve my community in that capacity, like my father did and my grandmother did, helping to build our programming and serving our citizens, is something I’ll always be proud of,” he said.

Back in 2007, Nicholas joined the faculty at College of the Rockies as part of the Ktunaxa Nation Language Project, which was a collaboration to develop a Ktunaxa language curriculum for online language courses. For the duration of the program, which ran for three years, he provided online support for students.

In 2014, Nicholas was appointed to the college’s board of governors, and in September 2017 he was elected chair of that board.

“I am honoured to be acclaimed as chair of the board of governors for the college,” he said. “It’s a big responsibility, but I have the unique perspective of having worked at the college as both a faculty member and a member of the support staff. I’m in awe at being there, among those distinguished folks, and I’m happy to be a part of helping the college fulfill its vision of creating and delivering the most personal student experience in Canada.”

In all of his roles, Nicholas believes in consensus building. He said that no group will have 100 per cent agreement 100 per cent of the time, so it’s important to be willing to work through the issues to come to an understanding that everyone at the table can support.

Nicholas talked about what makes his life and his work fulfilling.

“To me,” he said, “success is when I can reflect on something I’ve done today or yesterday or even years ago, and say to myself, ‘I’m proud of what I accomplished because I feel I made  a positive contribution towards something that benefits others.’ It could be towards a project I’ve been working on with the Ktunaxa Nation Council or it could be in my capacity as a friend, husband or father.”

Nicholas also values a sense of working towards mutual understanding, the opportunity to learn and the potential to have fun at what he’s doing. He said that being identified as an influencer is both an honour and a responsibility.