Paul Reimer has forged a successful business in iron works 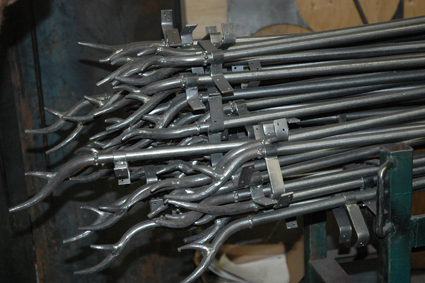 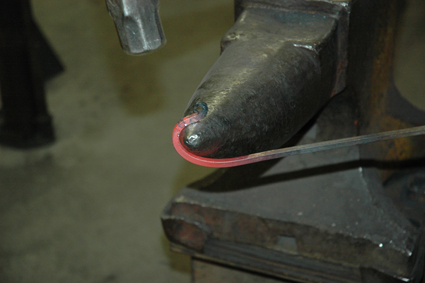 2 of 7Reimer hammers and bends a piece of fire-heated metal into the desired shape. — Tanya Laing Gahr photo 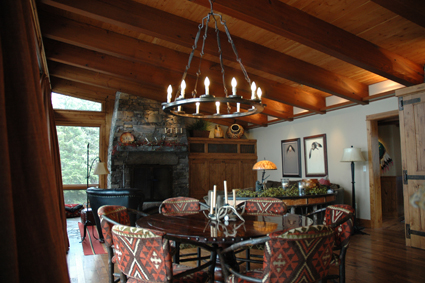 3 of 7Several of Reimer's pieces, including the chandelier, door hinges and handles, add to the overall feel of the room. — Courtesy Paul Reimer 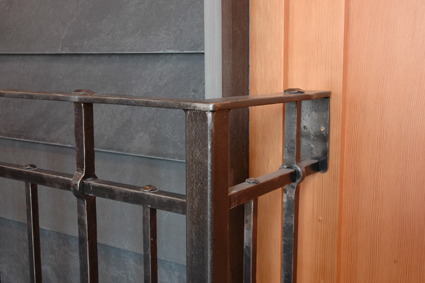 4 of 7Reimer used ancient techniques to punch square holes through rails so he could thread through another piece of steel. — Courtesy Paul Reimer

5 of 7Reimer worked closely with graphic artist Mike Hepher to create the design of this stunning door. — Courtesy Paul Reimer 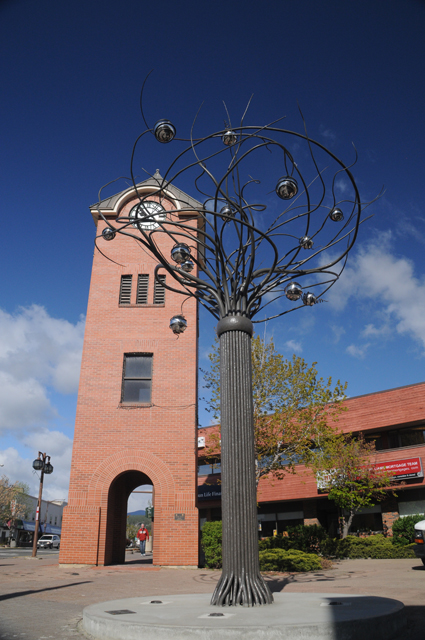 6 of 7The Spirit Tree in downtown Cranbrook has quickly become as iconic a landmark as the City's clock tower. — Kris Lindblad photo 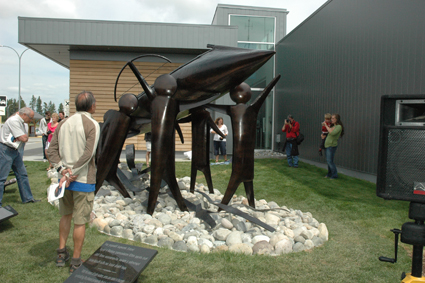 7 of 7The Reconciliation Sculpture has significant meaning to the City of Cranbrook and the Ktunaxa Nation. — Tanya Laing Gahr photo

The workshop of Reimer & Company Architectural Blacksmiths in Cranbrook is currently ringing with the sound of hammers hitting anvils as the blacksmiths complete an order for the Banff Caribou Lodge—400 forged steel headboards, curtain rods, end tables and bathroom hardware. While the project is one of the largest in terms of volume, blacksmith Paul Reimer has a number of impressive and inspiring accomplishments to his name, both large and small.

Reimer has been a blacksmith for over 20 years. He started learning the ancient trade when he was still in high school and continued to pursue the craft as the master blacksmith at Fort Steele Heritage Town, where he worked for seven years. When massive layoffs at the heritage site left him without a job, he opened his own business in 2001. He continued to forge the same creations that tourists would snap up at the Fort Steele smithy, but he expanded his repertoire as well, creating custom ironwork for homes, resorts and businesses.

I asked Reimer what the greatest difference is between the working in the Fort Steele smithy and his modern workshop.

In fact, the techniques Reimer and his team of five smiths use are the same ones that blacksmiths have been using for hundreds of years. The shop is heated, the safety procedures have been improved and some of the tools used for welding are state-of-the-art, but the individual pieces are still fired and tempered using the same hammers, tongs, anvils and vices as master smiths used in the 1600s.

Not that everything is exactly the same. Some modern improvements allow Reimer and his team to create individual, handmade pieces that are completely unique as well as more uniform, fabricated items that are more suitable for the average chequebook. Reimer stressed that custom work means being able to work with a customer’s budget as well as their overall design concept.

Reimer began taking some of his pieces to art shows in B.C., Saskatchewan, Wyoming and Montana. From there, he began to expand into more creative and large-scale works, a progression Reimer said was natural.

“The products were at such a high end, it was already artwork,” he said.

Indeed, the artistry is apparent in all of Reimer’s products. There is a a simple-seeming railing that involved threading one piece of steel through several others that is somehow reminiscent of the Greek hero Odysseus shooting an arrow through a dozen axe heads. There is the ornate door that involves complicated scroll work and animal figures using a technique known as repoussé. And then there are the public works of art that are putting Reimer and his artistic partner, Mike Hepher, on the map.

Hepher worked under Reimer for the first two years the business was open, until Hepher struck out on his own as a graphic artist. However, they continued to collaborate on projects requiring Hepher’s design skills—not to mention his understanding of the trade—and Reimer’s blacksmithing talents. Besides the custom iron work for discriminating customers, Reimer and Hepher also created two large-scale book sculptures for the Cranbrook Public Library, the Spirit Tree that is located in Cranbrook’s downtown core, and most recently, the Reconciliation Sculpture located at the Canadian Rockies International Airport.

Reimer is hoping for other large-scale installation pieces in the near future, but in the meantime continues to enjoy the simpler pieces for his clients that still require an exacting eye and hammer stroke.

“I love the creativity,” he said. “You can create something beautiful out of a material that is strong enough to build railroads. You can completely transform the material.”