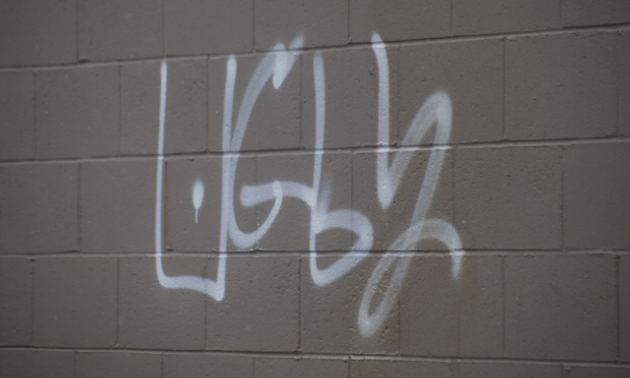 Cranbrook businesses have been tagged with “ugly” graffiti for many years. — Photo courtesy Lynn McIntosh

A vandalous villain has been plaguing the streets of Cranbrook by plastering graffiti all over the city. Walls have been covered with tags that say “krooked,” “phiz,” and, most notoriously, “ugly.” Instead of sitting on the sidelines in hopes that something would be done about the problem, one woman stepped up to stem the torrent of malicious behaviour.

It all began six years ago for Lynn McIntosh. That’s when someone entered her shop and painted an offensive graffiti tag inside the building. Since then, she’s been searching out and eradicating graffiti in Cranbrook. During this mission, McIntosh discovered that the majority of the graffiti she found was the handiwork of a solo individual.

“For years, I have been taking this person's tags down around town,” said McIntosh. “If I had not been doing this, our town would be covered in graffiti.

“I believe the city has over 400 ‘ugly’ tags. I estimate that 90 per cent of the graffiti you see in this town is the ‘ugly’ artist's work. The downtown area has been hit the hardest. They’re on everything: radio stations, newspapers, parks, businesses and churches. It makes me sad to see Cranbrook covered in tags. I feel deeply sorry for businesses and clubs who were hit badly by the artist.”

Besides the nasty blemish of having graffiti scrawled across buildings, the word “ugly” itself can have a negative impact on the psych of the city’s residents.

“Having ‘ugly’ plastered all over our city affects us on a subliminal level,” McIntosh said. “It is not a positive message to send to locals or tourists. Cranbrook is not ugly, so graffiti that says so needs to go.”

To combat this bleak messaging, McIntosh dons a particular outfit to shine a light where the vandal placed darkness.

“Occasionally, I wear a beaver costume while volunteering,” she said. “I’m a proud Canadian doing good things for our community. I like to volunteer. Giving back to others is so rewarding.”

Like most superheroes, McIntosh relies on a solid supporting cast to do what she does.

“I need the community’s help to remove the high number of graffiti tags,” she said. “Cloverdale Paint helps with the removal of Graffiti Tags by offering free to wholesale paint and graffiti removing products. Many other businesses have offered support over the years with funding and equipment. The city has been a huge support over the years in taking down graffiti. If you see graffiti on city property, dial 311 and report it to the city. They will take down if reported.”

Experts say to take down graffiti quickly because it tends to encourage more graffiti and other vandalism. Even then, if graffiti is not replaced with new artwork, it will often get tagged again.

“Cranbrook needs more murals,” McIntosh said. “The Street Angels have helped wash, sand and paint a 40-metre wall so we could put up Canadian flags. This is just another example of how Cranbrook steps up to challenges.

Until recently, the Cranbrook graffiti artist’s identity was unknown. This winter, the individual's activities increased and McIntosh couldn’t keep up. Then, two months ago, the vandalism menace slipped up and McIntosh caught him in the act.

“I was sitting on my porch one evening and along he came,” she said. “I watched him paint a graffiti tag on a hydro box in front of my house so I called the RCMP. ‘No way,’ I thought. ‘We got him? Yes!’ ”

The vandal was apprehended by police shortly thereafter.

Still more work to do

McIntosh hopes the vandal will take part in cleaning up some of the mess they created around Cranbrook. Even if that happens, McIntosh will need more assistance. If you would like to donate time or funds to help cover the cost of the graffiti removal products and paint, contact McIntosh at [email protected] or call 250-426-4790 and leave a message.