The Sparwood station is conveniently located across from the District of Sparwood Office. 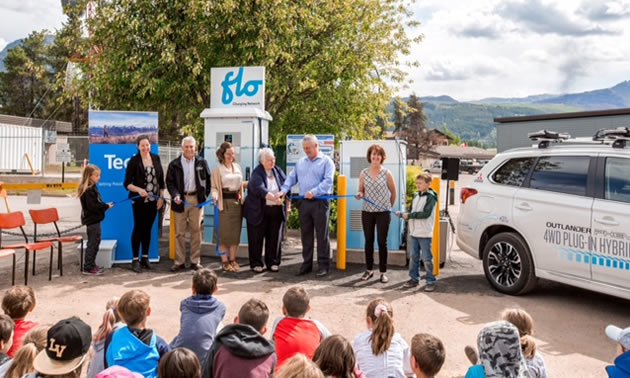 Sparwood, B.C. – The Southern Gateway to British Columbia is celebrating a connected Highway 3 charging station network that now extends across the Kootenay region. Sparwood cut the ribbon on a DC Fast Charging station, making it easier for electric vehicle drivers to travel to and from the Elk Valley.

The Sparwood station is conveniently located across from the District of Sparwood Office, with a view of the solar array recently installed to demonstrate renewable energy options. The station is walkable to the nearby grocery store, library and Visitors Centre.

“The District of Sparwood is proud to be partnering on the Accelerate Kootenays initiative. The charging station is another amenity that is now available for visitors to the region. It is also another demonstration of Sparwood’s commitment to sustainability, something that we take seriously as a community reliant on our natural resources.” said Sparwood Mayor, Cal McDougall.

As a partner in the Accelerate Kootenays initiative, Teck helped enable the installation of a charging station in Sparwood, near its five steelmaking coal operations in the Elk Valley region. Larry Davey, Vice President, Planning & Development from Teck attended the launch in Sparwood. “Our involvement in the Accelerate Kootenays initiative aligns with our efforts to support the transition to a low-carbon economy, along with providing the metals and minerals required for clean technology. This charging station is a great example of Sparwood’s focus on sustainability, a commitment shared by the thousands of Teck employees in the region.”

The Sparwood fast charger will be owned and maintained by BC Hydro as a long-term commitment to the BC communities that host the stations.

Accelerate Kootenays is a two-year, $1.8 million project that is the result of an innovative collaboration between local and provincial governments as well as funding agencies that have worked together to address the charging infrastructure gap across the region.

The project has been made possible by an unprecedented local collaboration led by the Regional Districts of East Kootenay, Central Kootenay and Kootenay Boundary, and includes in-kind and funding contributions from the Federation of Canadian Municipalities’ Green Municipal Fund TM (GMF) and the Government of Canada, Columbia Basin Trust, B.C. Ministry of Energy, Mines and Petroleum Resources, Teck, FortisBC, BC Hydro and Powertech Labs. Accelerate Kootenays is facilitated by Community Energy Association.