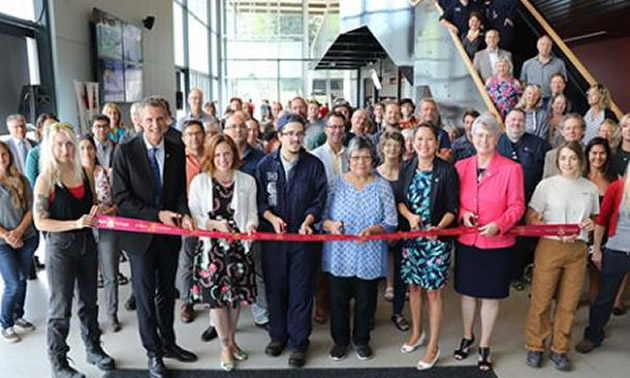 Selkirk College students are now able to access cutting-edge training facilities that will get them job-ready for in-demand trades careers, with the official opening of a new trades training facility in Nelson.

“Students in the Kootenays will have access to state-of-the-art facilities and the equipment they need to be industry ready,” said Melanie Mark, Minister of Advanced Education, Skills & Training. “Our government is delivering 21st Century trades training to give students the hands-on experience they need to get high paying, family supporting jobs and be a part of building the best in BC.”

The minister was at the Silver King Campus in Nelson on Monday (August 26) for the official opening of three renovated shop buildings and a new Student Commons Building, which are all LEED certified. Selkirk College President Angus Graeme joined Minister Mark, students, faculty, alumni, industry representatives, government officials and community members for the grand opening event.

More than 500 trades students and instructors can now access modern trades training facilities to get hands-on experience in programs like heavy mechanics, carpentry and welding.

“Selkirk College is so grateful for the way that the Province of BC, the Government of Canada, Columbia Basin Trust and our industry, labour union and local government partners have come together to reimagine and renew the Silver King Campus,” Graeme said. “With everyone’s help, students now have a truly life-changing environment to learn, gain confidence and be job-ready for a tremendous future in their chosen field.”

The project will create space efficiencies that will enable the college to accommodate existing demand, as well as future growth, without increasing the campus footprint.

British Columbia has received $257 million through the SIF. Twenty public post-secondary institutions and one private First Nations institution in BC are benefiting from 30 individual projects throughout the province.

Learn more about the Selkirk College School of Industry & Trades and join us on Facebook.