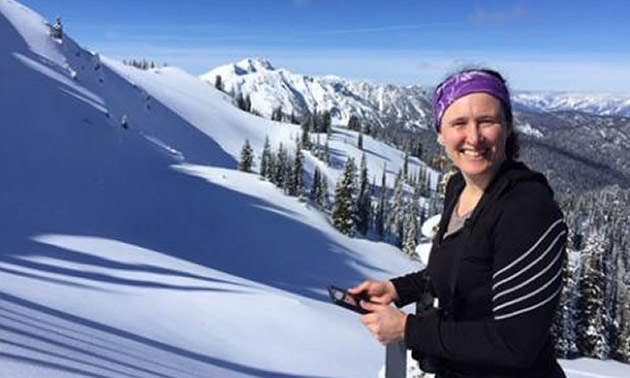 Selkirk College Instructor Doris Hausleitner in the field where she is part of Project Wolverine that has spent the last eight years studying the mysterious creature in Canada’s Columbia Mountains. — Photo courtesy Selkirk College

Selkirk College instructor Doris Hausleitner finds happiness in discovering and recording the everyday patterns of mysterious creatures that dwell in the isolated terrain of our region.

Hausleitner is a core member of Team Wolverine, a group of scientists who have been conducting vital research aimed at understanding the effects of human activity on the mammals that live in Canada’s Columbia Mountains. As part of her consulting work, the ecology instructor is currently using citizen science to help locate wolverine dens in the Southern Columbia Region that covers a 23,000 square kilometre habitat.

“I have learned that we know very little about the wolverine,” she says of the project that was launched in 2012. “It’s such an amazing species, I’m always awe inspired by them. Following their tracks up a cliff band, you wonder why they just wouldn’t go around. They have this one-track mind, they are focused and they are formidable. They move amazingly in the mountains.”

A Passion for Exploration and Observation

When it comes to traveling through challenging mountain terrain, Hausleitner is no slouch herself.

Born-and-raised in Whitehorse, Hausleitner spent her youth in the Yukon exploring the outdoors with her family. A first-generation Canadian with a Swiss mother and Austrian father, she entered competitive cross-country skiing at a young age and excelled in the sport. A member of the Canadian National Developmental Junior Team, she attended the University of Alaska Anchorage on scholarship as part of the school’s nordic ski team.

While working on her undergraduate degree in biology, Hausleitner was a force in NCAA competition, earning both All-Academic Team honours and All-American Team honours. In 1997, she captured an NCAA Championship in 5K Classical, an achievement that cemented her place in University of Alaska athletics lore.

After her successful athletic and academic chapter wrapped up in Alaska, Hausleitner moved south to Moscow, Idaho where she earned a Master of Science degree at the University of Idaho and took her passion for fieldwork to the next level.

“When I was in Grade One and people asked me what I wanted to do when I grow up, I would tell them that I wanted to be a professional hiker,” Hausleitner laughs. “Not sure if that’s a job, but that’s pretty much what I do when I’m in the field… I get paid for hiking. I feel like I kind of made it to that Grade One goal.”

As part of Wolverine Watch, Hausleitner has been tracking the elusive creature using bait stations, drones and citizen science to collect data that is essential in understanding more about distribution, reproduction, connectivity and gene flow. The work takes her into remote locations in both winter and summer where the focus, patience and determination of her athletic background and love of the outdoors is an essential compliment to her knowledge as a biologist.

“The work we are doing helps industry and it helps recreation,” says Hausleitner, who sometimes travels more than 30 kilometres on skis a day while doing research. “At the outset it might look like we are doing this work to shut down industry or recreation, that’s not the case. We want to enable all of the users of the landscape, but not at the expense of the wolverines.”

Over the last couple of years of the study, there has been an increase in the role played by citizen science. Wolverine Watch has been undertaking public outreach asking users of the backcountry to report discoveries of tracks and sightings. In the last year, they have received more than 250 submissions from the public which has helped narrow down the search for wolverine dens.

“One piece of technology that has really changed our lives as biologists is the cell phone,” says Hausleitner. “The public is now our walking, skiing or snowmobiling technicians in the field. They are out there already and now they have these great data collectors.”

Lessons Learned in the Field Translate to the Classroom

Hausleitner began her teaching career at Selkirk College in 2011. She is a beloved ecology and biology instructor in the School of Environment & Geomatics where she helps mentor students in both the Integrated Environmental Planning Program and the Recreation, Fish & Wildlife Program.

Though the curriculum extends well beyond the scope of her work as a consultant, Hausleitner is able to use her fieldwork as a learning tool for future leaders in research and outcomes.

“It keeps me relevant in my profession and motivates me to be on the top of my game,” says the 44-year-old. “That translates over to the students because it gives me a story to tell and I am able to bring that excitement to the classroom.”

Active and well respected in the region through her work on numerous societies and organizations focused on ecological conservation, Hausleitner is a champion of creatures who need protection. Though fierce, resilient and powerful in its own ecosystem, the wolverine is one of those species that requires a commitment by people like Hausleitner to continue be one of the great mysteries of our mountains.

“One of the best ways we can protect wolverines is if we value them,” she says.