The project is an important step in protecting and conserving Ktunaxa cultural, biodiversity and ecosystem values in the Qat’muk 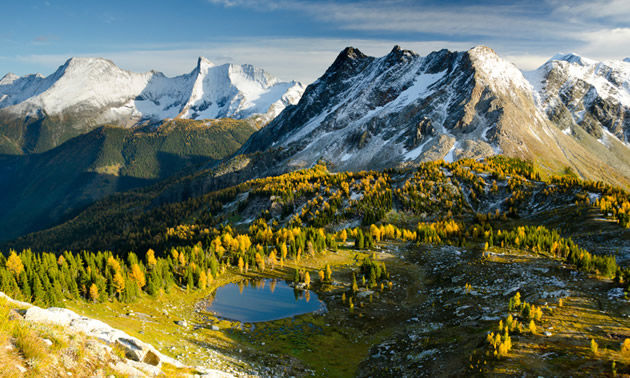 This week the Ktunaxa Nation received approval from Environment and Climate Change Canada for funding to work toward developing an Indigenous Protected and Conserved Area, up to 211,045 hectares, in the Qat’muk area of the central Purcell Mountain range.

The project will receive $16,102,916 in funding over four years to cover work such as mapping and assessing cultural and biodiversity values, negotiating to buy out conflicting land tenures, and developing boundaries and an interim stewardship plan. The work will take place in the central part of the Purcell Mountain range, between the Purcell Wilderness Conservancy and Bugaboo Provincial Park. The area contains old growth ecosystems, headwaters of ecologically-important watersheds, and habitat for nearly 300 at risk species, including critical habitat for the Southern Mountain Caribou and a crucial international wildlife corridor for grizzly bears. To the Ktunaxa, Qat’muk is home to the Grizzly Bear Spirit which is a source of protection, guidance and strength. The project is an important step in protecting and conserving Ktunaxa cultural, biodiversity and ecosystem values in the Qat’muk area.

MP Wayne Stetski (Kootenay – Columbia), who has spoken in the House of Commons on the importance of Qat’muk to the Ktunaxa Nation, offered his support and congratulations on the project saying, “this has been a long time coming. I appreciate the years of hard work by the Ktunaxa Nation and many of my constituents to ensure Qat’muk is protected for future generations”

Kathryn Teneese, Ktunaxa Nation Council Chair, welcomed the announcement but indicated there is a lot of work ahead saying, “the funding is conditional on negotiating the project details and signing a contribution agreement. I am excited to move forward with the next step of this project that will conserve critical ecosystems and the cultural heritage of the Ktunaxa Nation.”

John Bergenske, Conservation Director of Wildsight, praised the announcement, saying, “After nearly 30 years of determined efforts to keep Jumbo wild by the Ktunaxa Nation and people from across the Kootenays —and around the world, we can celebrate this major step toward legal recognition of Qat’muk. The possibility of a Ktunaxa Indigenous Protected and Conserved Area in the central Purcell Mountains is fantastic news. Jumbo Valley is a vital part of one of North America’s most important wildlife corridors. Wildsight will continue working to maintain the wildlife and biodiversity of the entire Purcell ecosystem.”

Meredith Hamstead, Director of the Jumbo Creek Conservation Society, also celebrated the announcement, saying, “the August 9th, BC Court of Appeal decision reaffirming termination of the provincial Environmental Assessment Certificate for Jumbo Glacier Resort was an important win for Jumbo Wild, but it left uncertainty about litigation, new resort applications, and the municipality-without-residents as back-doors for development in Jumbo. Nearly three decades of persistence, resilience, and collaboration by the diverse people of this region, including the Ktunaxa Nation, have finally, and justly, resulted in the possibility of true protection of the ecological, cultural, and spiritual values of the Jumbo Valley and Qat’muk!”