Mine rescue teams to compete in Elkford 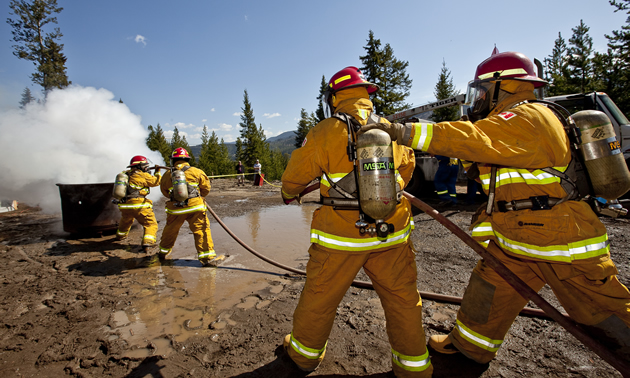 Mine rescue teams battle to put out a fire at a past East Kootenay Zone Mine Rescue Competition. The 2015 event will be held in Elkford on Saturday, May 9. — Henry Georgi photo

The Elk Valley mining industry’s emergency responders will be on display on Saturday, May 9 at the 94th East Kootenay Zone Surface Mine Rescue and First Aid Competition.

The annual competition is hosted locally by the East Kootenay Mines Industrial Safety Association (EKMISA) and gives mine rescue teams the opportunity to be judged on how they would deal with five skill challenges – First Aid, Fire, Bench, Rope and an extrication – or ‘Other’ task.

The first and second place teams from the zone competition will go on to compete in the provincial competition in June in Smithers, BC and the BC champion will take part in the National Western Regional Mine Rescue biennial competition which is held in Fernie in September 2015.

This year there is also participation from other industry Occupational First Aid (OFA) teams as well as up-and-coming Intermediate (16-19 yrs) and Junior (12-15 yrs) First Aid teams. These teams compete in their own emergency event and showcase their first aid skills.

The competition day is a fun event for families - volunteer ‘victims’ and extreme make-up help to make the scenarios more realistic for the teams and spectators and there will be a free spectator barbecue sponsored by Finning and SMS.