Because of delays getting product to Sparwood mines on time, magnetite will be shipped using a combination of trains and trucks. 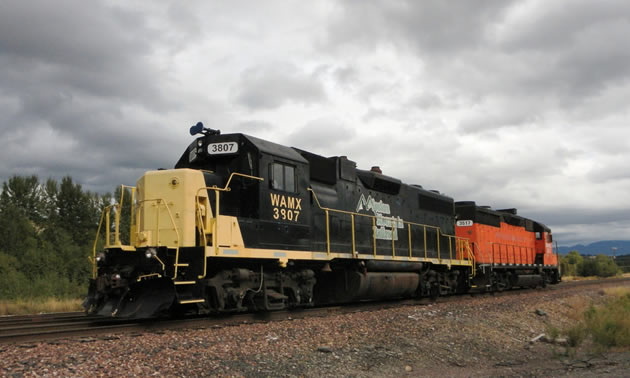 Using a combination of trains and trucks, magnetite will be shipped to the Elk Valley coal mines from Montana. — Photo: Flickr/Misson Mountain Railroad

Hundreds of tons of magnetite will soon be shipped by truck from Fortine, Montana to the Elk Valley coal mines, according the Flathead Beacon newspaper based in Kalispell.

BNSF Railroad is shipping the product from Longview, Washington to Montana via their mainline, and then a local short-line railroad called the Mission Mountain Railroad will transport it to Fortine. From Fortine the magnetite will be transferred to trucks which will transport the product another 80 miles, across the Canadian border at Roosville, along Highway #3 to the Elk Valley coal mines.

The magnetite comes from mines in Mexico and South America. In the past, the magnetite was shipped directly to the Elk Valley by CPR trains, but according to David Walker, a director of rail logistics for BNSF, this involved a process called “interchange” or the handing off of freight cars to another large railroad which often resulted in delays in getting the product to the Sparwood mines on time.

What is magnetite? According to Wikipedia, magnetite is a mineral and one of the main iron ores. It is one of the oxides of iron and is ferri-magnetic, which means it is attracted to a magnet and can be magnetized to become a permanent magnet itself. Magnetite is black or brownish-black with a metallic luster, has a Mohs hardness of 5–6 and leaves a black streak on anything it touches. Its common chemical name is ferrous-ferric oxide.

The Beacon article further stated, “At Fortine, the freight car is moved onto what’s called a “team track” and emptied at a loading dock with a front end loader.”

Walker told the paper, “We think this is a good alternative to the traditional ways of moving products over the border. Customers want options for how they ship commodities, and this is a great option for those shipping to Canada.”

Magnetite will arrive in Fortine in 66-foot-long gondolas which can move 100 tons of product at once. The Elk Valley Teck coal mines use magnetite in the coal-washing process.