The Disaster Mitigation and Adaptation Fund (DMAF) is a $2-billion, 10-year program to help build infrastructure 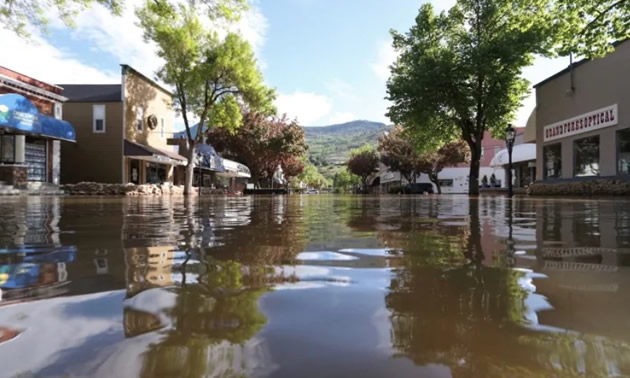 Now more than ever, communities need help adapting to the frequent and intensifying weather events caused by climate change. Reducing the impact of natural disasters such as flooding is critical to keeping Canadian families safe, protecting local businesses and supporting a strong economy.

In May 2018, spring thaws caused flooding along the Granby and Kettle rivers, devastating residents, businesses and households. By reclaiming and repurposing property in the City’s most flood-prone neighbourhoods, moving residents to a safer area, and constructing new flood mitigation systems to better manage flood waters, the community will be able to better protect its residents and businesses from future flooding.

The project also involves reinforcing approximately 1,300 metres of river bank along the Johnson Flats channel, re-establishing a natural flood plain in North Ruckle and building new retention ponds in South Ruckle. A total of more than 2.3 kilometres of road and trail dykes will be constructed or reinforced in strategic areas to manage flood waters within the City and by the railway tracks.

The City of Grand Forks estimates that once complete, the project will increase the flood resilience of over 800 residents during spring thaws and other extreme weather events. The project is also expected to reduce the number of residents who go without essential services during flooding by 45 per cent, and will provide long-term savings in recovery and replacement costs.

The Government of Canada is investing over $19.9 million, the Government of British Columbia is providing more than $28.9 million, and the City of Grand Forks is contributing $1 million to this project through the Disaster Mitigation and Adaptation Fund.

“We know that preparedness and mitigation is key to reducing the impact of natural disasters on our communities and improving recovery outcomes. That’s why I’m pleased our government is providing $28.9 million in natural and structural flood mitigation works as part of our continued support of the community and the people of Grand Forks in their efforts to recover from and rebuild after the devastating floods. In partnership with the community of Grand Forks, we are also providing an additional $2.6 million toward a $3.1 million flood protection work project in downtown Grand Forks.” — The Honourable Mike Farnworth, British Columbia Minister of Public Safety and Solicitor General

“As Grand Forks continues to recover, this flood mitigation funding will help the community find a safer path forward. The Province has been working alongside the local government from the start of this emergency, and we will continue to stand with Grand Forks into the future.” — Jennifer Rice, British Columbia Parliamentary Secretary for Emergency Preparedness

“These measures to mitigate flooding and take people out of harm’s way in Grand Forks will go a long way in ensuring the devastating impacts of 2018 are not felt again. This project will help protect families and their properties while also creating jobs and laying the groundwork for a strong sustainable economy and future for the community.” — The Honourable François-Philippe Champagne, Minister of Infrastructure and Communities

“Extreme weather is becoming more severe, more frequent, more damaging and more expensive because of climate change. By investing in the infrastructure that protects our neighbourhoods, businesses, and families, we are building communities that can withstand future natural disasters and thrive for generations to come.” — The Honourable Ralph Goodale, Minister of Public Safety

“Over the last year, the Boundary Flood Recovery team has worked tirelessly to secure funding for flood recovery and risk reduction for future floods. The partnerships we forged and built to accomplish this have been vital and extremely helpful, particularly with our provincial and federal government partners.  Special thanks to those Provincial representatives that went above and beyond their regular duties to help build these communities back better, such as Parliamentary Secretary Jennifer Rice and her dedication of time and energy to help make our communities safe and to support our vulnerable populations.” — Roly Russell, Chair of the Regional District of Kootenay Boundary

“We’ve come together to support the flood affected residents of Grand Forks after the flooding in 2018. Despite the challenges, the resilience of our people has shown that we can and will recover. Thank you to the senior levels of government that continue to support our community with this new funding.” — Brian Taylor, Mayor of the City of Grand Forks