The Ktunaxa Nation and the City of Cranbrook: A partnership with Indigenous people and a community 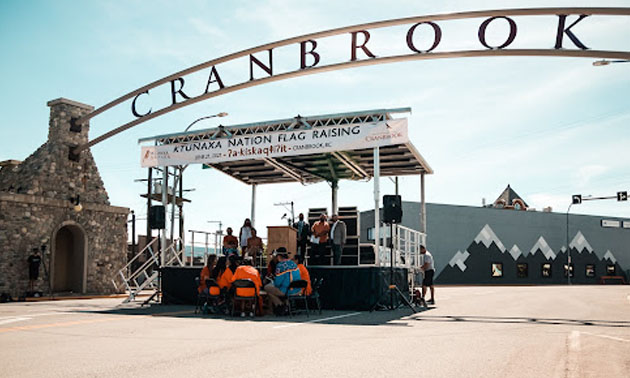 The Cranbrook community celebrated National Indigenous Day on June 21, 2021 by adding the Ktunaxa Nation Flag to the other flags at the entrance to the city. Indigenous View photo

The stone archway entrance to Cranbrook has a new entity. Flying alongside the flags of Canada, B.C., USA and the City of Cranbrook is a new one—the Ktunaxa Nation flag.

Here’s how this government-to-government (G2G) relationship got started and where it’s headed.

Getting to know our neighbours

Janice has been working with the business sector throughout the region, including businesses in the tourism sector, and many projects such as the Columbia River Treaty Heritage project.

“Right now we have an excellent relationship with the business sector in the Kootenay region,” she said.

One day in 2018, Janice received a phone call from Darren Brewer, Business Development Officer (BDO) with the City of Cranbrook.

“He was the first BDO to ever approach the Ktunaxa Nation,” Janice said.

June 21, 2021 is National Indigenous Day, an ideal day for the Ktunaxa flag to join the flags of Canada, B.C., USA and the City of Cranbrook. Many dignitaries were present, including Mayor Lee Pratt and Hon. Sophie Pierre, Former Chief of the Ktunaxa Nation.

“The City is flying the Ktunaxa flag in recognition that we are both here,” said Janice.

“I refer to this as history in the making,” she said, “because it’s a government-to-government relationship between the Ktunaxa Nation Council and the City of Cranbrook.”

Janice and Darren are working on several other initiatives but the most exciting one is what Janice refers to as “the big idea.” They want to bring to fruition an interpretative centre—for lack of a better term at this point—in Cranbrook that will serve as a visitor centre as well as a cultural centre.

“The vision for the infrastructure is to tell the story of the Ktunaxa and to create a workplace for our artisans to show their skills as well as to manufacture and sell their artwork,” Janice said.

The building itself would reflect the Ktunaxa people and be an attraction to visitors and residents alike. Currently, the Cranbrook Visitor Centre is a collaboration among Cranbrook Tourism, the City of Cranbrook and the Cranbrook Chamber of Commerce.

This project has received $93,500 in funding from the Columbia Basin Trust and the Economic Trust of the Southern Interior (ETSI-BC). A feasibility study is now underway, which includes finding a highly visible location, such as a site on Highway 95.

Both Darren and Janice are very excited to get to work.

“Indigenous tourism is an underserved and emerging sector in the tourism space,” said Darren, who cited excellent regional examples including St. Eugene Golf Resort and Casino and Ainsworth Hot Springs.

The City of Cranbrook is currently working on downtown revitalization, and Darren calls the Ktunaxa Nation a key stakeholder and pillar in this initiative. The Nation owns one of the most beautiful historic buildings in the downtown—the former Central School, which contains their offices. To date, over $100,000 has been awarded to this revitalization initiative.

Two other City of Cranbrook projects underway are its Official Community Plan (OCP) and the Cranbrook Tourism Master Plan. Darren said the timing of this G2G partnership is perfect as their work can tie into both plans.

“It’s about accurately portraying our community and all its members in these plans,” Darren said.

Two other projects that are in the works are the ʔaq̓am community solar farm on lands they own adjacent to the Canadian Rockies International Airport on the outskirts of Cranbrook.

ʔaq̓am also plans to develop land adjacent to the Northstar Rails to Trails near Wycliffe. Currently called St. Mary’s Park, the land will be renamed to the ʔaq̓am Park. This park will feature trails and other low-impact amenities.

Both Janice and Darren are proud and excited about future prospects of their relationship.

“We’re crafting a mutually beneficial relationship,” said Darren. “We’re creating a framework here for these G2G partnerships with the Ktunaxa.”

Janice considers their collaborative work part of reconciliation as it involves engaging in meaningful relations and includes calls to action.

As she said about herself and Darren, “We’re the boots on the ground.”